The Genetics of Bone Formation 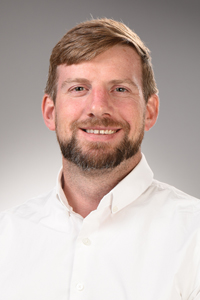 As an expert in the genetics of embryonic development and an assistant professor in the Department of Periodontics, Eric Van Otterloo has opened a new dimension for understanding craniofacial development, genetics, and bone formation.

Van Otterloo’s most recent line of research began when he identified, in the mouse genome, a mutation in the gene Memo1. The mutation, which removed the Memo1 gene, affected craniofacial bone development. Up until that point, Memo1 was primarily associated with breast cancer. In this context, Memo1 was responsible for cell migration, and thus breast cancer metastasis, but Van Otterloo’s discovery opened a new area of inquiry for this gene.

During embryonic development, the cartilage and bone in the head and the face develops out of a particular kind of cells called the neural crest. Along with the cranial bones and cartilage, neural crest cells contribute to several tissues important for life. Van Otterloo’s discovery, using mice with mutations to the gene Memo1, revealed the MEMO1 protein has a unique role in regulating neural crest derived craniofacial bone.

He and his team began investigating the precise mechanism behind this developmental process. First, they found that deleting Memo1 from the neural crest cells alone resulted in some of the same defects they had observed when Memo1 was removed from the entire mouse embryo. This finding suggested that Memo1 played a role directly within the neural crest cells to regulate craniofacial bone mineralization, rather than having an indirect impact on these cells.

Like the neural crest, the ectoderm also contributes to ameloblasts, the cells that deposit enamel on the outer surface of the teeth. Would MEMO1 also play a role in the mineralization process of these cells? To address this question, the Van Otterloo lab deleted Memo1 specifically from the ameloblasts. They found that deleting Memo1 from these cells resulted in severely compromised tooth enamel, again, suggesting Memo1 was somehow involved in mineralization of another tissue.

These experimental processes have helped Van Otterloo and his team investigate the precise mechanism by which Memo1 is regulating mineralization of distinct tissue types during craniofacial development. Current work in the Van Otterloo lab includes trying to determine exactly how Memo1 is controlling both of these mineralization events, and whether there are any shared feature in these mechanisms.

“Being able to understand the mechanism by which Memo1 operates could allow us to enhance bone formation or block bone formation to address developmental defects,” he added.

Van Otterloo is continuing this work with a recent, and he was recently awarded a three-year $700K grant for a project investigation the interactions between Memo1 and Runx2.

Runx2 is a transcription factor for activating genes and a master regulator for bone development. In this research project, Van Otterloo is exploring the precise relationship between Memo1 and Runx2.

“We know that Runx2 is crucial for bone development, but we don’t know whether or how it is related to Memo1,” Van Otterloo explained. “We will determine how central Runx2 is to the expression of Memo1 in gene regulatory networks in bone and enamel development,” Van Otterloo added.

Building on Memo1’s role in communicating and directing other cells, it may be the case that Memo1 plays a coordinating role setting up the cytoskeletal system, which plays an important role in the formation of bone and teeth.

In particular, Van Otterloo said that Memo1 could be a good candidate for the team of researchers at Iowa looking into specific therapeutics regarding bone regeneration, and Memo1 could be used to improve specific bone regeneration strategies. Likewise, researchers at Iowa who specialize in orofacial clefting and human genetics could explore the role of Memo1 in various patient cohorts with orofacial clefting.

These studies into the genetics of embryonic bone formation are not only expanding scientific knowledge in the area, but they are also laying the basic science groundwork necessary to move from the bench to the dental chair.