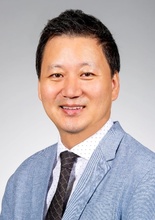 The college is proud to announce the appointment of Aaron (Seok Hwan) Cho, DDS, MS, MS, FACP, FACD, CDT as the next department head (DEO) of prosthodontics at the University of Iowa. Cho will be appointed Associate Professor (with tenure), effective August 29, 2022.

He is currently associate professor and program director of graduate prosthodontics and director of the Post-Doctoral Implant Placement Program (PDIPP) at Texas A&M University College of Dentistry, Dallas, Texas. Cho is a board-certified prosthodontist as well as a certified master ceramist.

Cho completed the Advanced Specialty Program in Prosthodontics at Texas A&M University College of Dentistry (former Baylor College of Dentistry), Dallas, Texas. Since then, he was on faculty at Marquette University School of Dentistry, Milwaukee WI, as clinic director of the graduate program in prosthodontics and pre-doctoral program director for prosthodontics and biomaterials. During his time at Marquette University, he received top student evaluations for his teaching for 4 successive years and was selected by the graduating classes of 2014 and 2015 to vest them with their academic hoods.

Cho received the Robert S. Staffanou Memorial Graduate Prosthodontic Award as the best resident when he graduated from the graduate prosthodontic program at Baylor College of Dentistry (2010). In addition, he earned first place in the Stanley D. Tylman Research Awards from the American Academy of Fixed Prosthodontics (2011). Since then, his residents and students have received many awards, such as the Stanley D. Tylman Research award and grants. Among several teaching and professional service awards, the most notable one he received was the Claude R. Baker Faculty Award from the American Academy of Fixed Prosthodontics, as an exceptional dental school junior faculty member in pre-doctoral fixed prosthodontic teaching (2017).

Clark Stanford, dean of the University of Iowa College of Dentistry, said of Cho:

The college is very confident with the strength of Dr. Cho’s leadership for a strong future in prosthodontic clinical, educational, research and scholarship endeavors of the department.